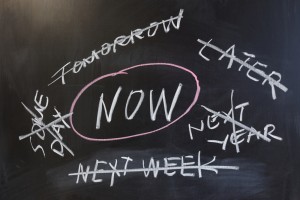 Terry said “I procrastinate. There is no doubt about it. I have to prepare to teach a subject I’ve never taught before. All those lesson plans…”

“Why do you think you put it off” I asked.

She said “fear … I’m afraid it won’t be perfect. I know it stems back to not meeting my father’s expectations as a child. He would give me a lecture about how I could improve instead of telling me what a swell job I did.”

“What did you want to hear from him?”

Terry paused then said, “I’m proud of you. Look at what a marvelous thing you’ve accomplished.”

“So you’ll need to start saying it to yourself, I said”: I’m proud of myself. I like all that I’ve accomplished.

We came up with these additional support statements to repeat over and over every day before sitting down at her desk to work on her class plans.

“It doesn’t have to be perfect right now. It’s just a first draft. It’s a work in progress. No need to judge it. It’s part of a process.”

She was smart and realized the need to break the big task into small doable pieces and focus on each one, one at a time. This is “being specific” one of the 4 constructive attitudes associated with peace and sooth, not stimulate fear.

After she repeated these phrases over and over with single focus for several blocks of 90 seconds, she had a realization and said, “I’ve had and have enough stress in my life. I don’t need more.”

She realized she’d enjoying doing the creative project she enjoyed so much… putting together a course on local history to graduate students.

These insights and truths became her anchors and would be ideal repellent whenever she felt the procrastination bug starting to buzz around her head:

I don’t want to feel stressed. I’ve had enough stress in my life.

It doesn’t have to be perfect right now. It’s a work in progress. It’s part of a process.

I’m proud of myself. Look what I’m accomplishing!

When we next emailed she reported that she was way into her course creation. Easy breezy. She knew she was changed forever. She didn’t want to feel stressed when there was a good alternative.

Tip: When the tendency to put something off, rears its ugly head, tenaciously remind yourself that you’ll feel so much better if you attend to it in a timely fashion. Combat your bargaining mind that justifies inaction, with what is true. Repeat that over and over, until you win the battle and take the necessary action. It might be scary to do, but you’re going to feel it regardless of when you do it, so you might as well not compound the issue by getting down on yourself or denying the repercussions that procrastinating brings.

This entry was posted in jude's blog and tagged fear, perfectionism, procrastination, Truths. Bookmark the permalink.
Popups Powered By : XYZScripts.com
We invite you to take our short survey.