The World of Corruption 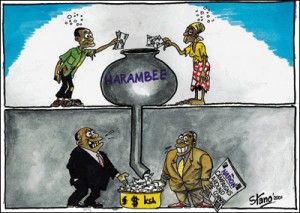 A recent article by ABC News got me thinking about why getting the planet, and all the countries that comprise it, back on task is going to be a massive job. The Global Corruption Barometer 2013 surveyed 114,000 people in 107 countries. It found that 50% of people believe corruption was worse in recent years and 27% copped to paying bribes so they could get access to public services and institutions. (I would really suggest you take a look at the above report. It’s full of interesting statistics and conclusions.)

88% of respondents think their government’s leaders are doing a poor job at fighting corruption. According to 114,000 people the five most corrupt institutions are:

1. POLICE. This is a world-wide problem, with police getting a 3.7 (on a scale of 1 to 5, where 5 means extremely corrupt and 1 means not at all corrupt.) Corruption is especially high in rural areas of countries such as Mexico and Venezuela. In Mexico 93% of drivers think traffic policemen are corrupt and it’s estimated that cartels pay police $100 million every month.

2. JUDGES. If you don’t think judges are trustworthy, it is more likely you’ll take justice in your own hands or allow offenders to escape. Of the 20 countries where respondents think judges are the most corrupt institution, 30% said they had paid a bribe to help their case. Like with the police and public officials, most of these countries were in South America, Eastern Europe, North Africa, or the Middle East.

3. PUBLIC OFFICIALS and CIVIL SERVANTS. Government workers who are in charge of land, registry, health, and education are most able to extract brides. This happens most in countries where rural and civil conflicts occur and the governments are centralized with large bureaucracies, such as Afghanistan, Iraq, Liberia, Venezuela, Mexico, and Colombia.

4. POLITICAL PARTIES. People who live in Argentina, Greece, Colombia, the United States, Brazil, Canada, Chili, Israel, Uruguay, and Jamaica believe that political parties are the most corrupt. In the USA 76% said that political parties were affected by corruption. 90% of Greek citizens believe the same. This is where people in the USA felt there was the most corruption.

5. PEOPLE LIKE YOU AND ME. 27% of the people surveyed said they had paid a bribe in the last twelve months. 21% said they were not willing to report incidents of corruption. In 16 countries over 50% said they would remain silent for fear of reprisal or because they didn’t have faith in their governments.

What does all this mean for me? Reading this makes me feel quite helpless because corruption is such an insidious problem.

Corruption has been around since time began so we’re not going to stop it completely. The road to balance and honesty is long but we each need to figure out how we can do our parts to restore the old fashion values of freedom and democracy we were taught in school.

But because I don’t live in a large city in the United States, where there is more likelihood of police and maybe judicial corruption, I think the place where I can contribute the most, is helping out political parties. That means both supporting the issues and politicians that I feel are important, both monetarily and verbally speaking out when it becomes clear that shady deals are going on. On the level of action, that means volunteering to support legislation and causes I believe in rather than turning a blind-eye and grumbling.

There are other things that can be done. Start a viral video campaigning highlighting when injustices occur. Create a petition, post it on Facebook and collect signatures to ignite change in your community or your world. We’re not altogether helpless, especially when it comes to supporting one another. Every small kind action you take towards others, and also towards yourself, helps improve the overall trust and feel good energy on the planet. Who knows? Maybe all those little actions will add up someday and create a domino effect, making a dent even in the rungs of our global police force, our political leaders and our officials in public services.

This entry was posted in jude's blog and tagged corruption, justice, kindness, Peace. Bookmark the permalink.
Popups Powered By : XYZScripts.com
We invite you to take our short survey.