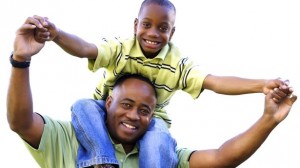 Recently Tom came into my office. He is a middle-aged athletic man living here in Santa Barbara with a lovely wife and 9-year old son, Jimmy. Tom was really frustrated because Jimmy would rather be on his computer than play sports. Every weekend was a battle to get Jimmy out of the house. It was getting old and there was growing unspoken tension whenever they were together.

In talking with Tom, it became very apparent how important sports were to him and his siblings while growing up. However, Tom also realized that he needed to change his thinking. He needed to find a way to let go of his expectation of having an athletic son love sports as much as he did.

Over and over, many times a day he told himself “Jimmy is the way he is, not the way I want him to be. I love him. He’s not me. Let Jimmy be Jimmy.” By interrupting his old thinking and repeating these phrases over and over, he had a shift. Tom got that he needed to accept Jimmy for who he is and find some activities they could enjoy together.

With his head now screwed on a little straighter, Tom then had a few great ideas. First, he decided he would hold his tongue whenever he felt the urge to make a comment about how Jimmy should enjoy playing sports. Second, he started to genuinely praise all the great things he saw Jimmy do and all the positive qualities he possessed.

Third, Tom decided to ask Jimmy to teach him how to text. Working together on texting led to a lot of laughter. After a while and much to Tom’s surprise, Jimmy suggested they walk to the pier and watch people fishing. They got out of the house and had a good time together.

Whenever Tom’s frustration resurfaced, he just repeated, “Jimmy is the way he is, not the way I want…” Sometimes he would have to say it many times, until he once again really got it. And each time he fought his own agenda, almost like magic, giving up his expectation allowed Tom to create a warmer, safer atmosphere with his son and for the entire family.

It sounds so simple, and it is, but it takes a big man and steadfast perseverance to combat and give up his own deep desires to have an athletic son. Whenever those thoughts bubble up he acknowledges his sadness and then embraces the spectacular child he has. And maybe someday, they’ll enjoy going to games together. Then again maybe they won’t, but either way, they’ll have a strong and loving bond, based on true acceptance and mutual interests.

This entry was posted in jude's blog and tagged acceptance, anger, Attitude Reconstruction, changing your thinking. Bookmark the permalink.
Popups Powered By : XYZScripts.com
We invite you to take our short survey.