I was looking out my window and something caught my eye on the jacaranda tree. A squirrel. There are a ton on birds, plenty of harmless little salamanders, but less frequently brown bunnies and squirrels.

So I grab my binoculars and voyeured in while he or she was dining. He was head on. What struck me was these two tiny black paws, grasping firm on an unfamiliar black/brown football shape nut. He looked just like you see in the photo. Slick fur and bushy tail behind and curling forward.

As I watched, the squirrel systematically peeled his treasure, going down the length of it almost like teeth on corn. It must have taken him a good two minutes. So precise. So skilled.

Never stopping, jaws continually moving at many times a second. Twirling that crazy nut – little bits of shell went flying, until it was peeled at last.

Now phase two: working the pure ivory kernel. It seemed this little creature was bent on extracting the very essence of that nut. Like a fine tuned machine, those cheeks were puffing in and out continuously, several times a second.

Not two bites or three or four, but getting the max out of every square millimeter of surface!

Finally, that one midsized nut had almost been consumed but he abandoned the last bite as a bird making a swoop caught his eye. Then I thought, how many times does he do that a day? How much time does he spend eating each day? Compared to a human, such a tiny world and tiny body yet so industrious and efficient.

Reminders from a squirrel: focus, persist, present. Be alert. Hold on and let go.

Are there any situations in your life where you continually have to do the same? Please share with us at: Facebook 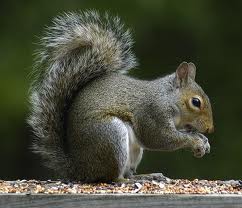