How To Soothe The Anger Beast Inside Us All

Everywhere you look in the media, you’ll find coverage and outrage about physical assault, analysis about why partners stay in abusive relationships and why people feel justified to strike out. What you don’t see, however, are viable solutions to this widespread problem.

The news repeats images that make us cringe: Ray Rice clobbering his wife in the elevator; a man in Canada beating his dog to death and depositing it in a dumpster; a Connecticut CEO kicking and beating a dog in an elevator; Chris Brown hitting Rhianna. It’s no wonder expressing anger gets a bad rap. It can be aggressive and often abusive. 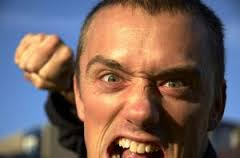 Anger is NOT a Bad Thing

Anger in itself is not a bad thing. Anger is an emotion – just energy. It’s moving energy in our bodies; just as wind is energy, water is energy, so are emotions. Expressing anger doesn’t mean you’re a violent person. But when that heated energy remains bottled up, something’s going to give: we’ll default to destructive ways of thinking, speaking, and acting.

Anger is a natural emotion over what we perceive as injustices and violations. Our expectations, and our “shoulds” also cause aggravation. When we don’t handle that energy physically, it turns into mental energy, and gets directed outward onto other people, things, and situations. We don’t accept what we see, judge it negatively, and feel convinced if the world/other people would just conform to how we think they should, everything would be just fine.

Putting expectations on others is a habit that keeps us feeling frustrated and angry. It puts other people off, and diminishes the amount of love we feel. Rather than continuing to stew in anger and then explode, there is something simple we can do.

Identify when you’re feeling that energy in your body – hot, aggressive, desire to strike out verbally or physically– and deal with the emotion constructively. Follow the lead of a toddler and have that temper tantrum rather than splat it onto others and destroy things of value.

Let ALL that Anger Energy & Frustration OUT!

Express the anger energy that underlies the frustration physically. Find a safe place where you can release pent up emotion physically and naturally – that hot, surging, tightening sensation in your body — in a non-damaging way. (You’ll only feel embarrassed until the satisfaction and benefit become obvious.)

Take yourself some place where you can let go and express the energy hard, fast, and with abandon. If you release anger energy physically and constructively, you’ll be too tired to fight! An easy way to do this is to lie on your back on a bed and flail your arms, legs, and head, while yelling and grunting.

Make sounds and noises because emotions are beyond the realm of words. No blaming or swearing. If you use words, yell something like, “I feel so angry. I feel so mad. I feel so pissed!” Swearing or saying negative things while expressing anger physically, just stokes the fire and reinforces thinking that the outside world is the problem. You’ll still be mad.

Pound clay or bread dough. Throw rocks. Yank out weeds with abandon. Stomp around. Push against a wall or doorjamb. Shout into a pillow. Move the energy out of your body. Do it hard, fast, and with abandon, until you’re exhausted. Catch your breath and do it again. Repeat until you can’t anymore!

Accept Reality in a Peaceful Way that YOU Control

End your healthy meltdown by reminding yourself, you must accept the reality — what is, is.

The best way to do this is to remind yourself, over and over, that: “People and things are the way they are, not the way I want them to be,” “This is the way it is,”  or “That’s the way they are.”

When repeated with focus and enthusiasm, your anger turns into amused acceptance. After repeating these words for a few minutes, it becomes a fact, instead of a big deal.

Then, you can look within your heart to decide what you need to say and do about the specific event to honor yourself and all involved. Maybe it’s to remove yourself from the situation temporarily. Maybe it’s best to say nothing, take a stand or initiate a discussion.

Acceptance does not mean passivity. First accept and then, speak up as needed. Make sure it’s about what’s true for you, and not laced with finger-pointing and global generalizing. Practice letting go and enjoying what is. Take the path of least resistance, even though in your perfect world you’d do it differently. Remind yourself of the larger perspective and follow through with what you intuitively know is best to do.