Gem from Nelson Mandela via Tiger Woods via Bill Dwyre 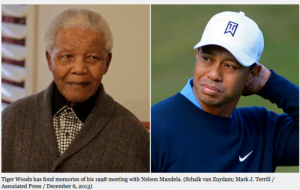 Bill Dwyre, a sports columnist for the LA Times, wrote a wonderful article about Tiger Woods and Nelson Mandela on December 7, 2013. When Tiger was asked about a meeting they had in 1998 after he won his first major golf tournament at the age of 22, according to Dwyre, “Usually Tiger would say something like:

• ‘He is such an intelligent man and so well balanced and so articulate that he was a pleasure to be around.’

• ‘I’ve read a lot of books over the years, and certainly understand what he went through, and what he had to deal with, and to be able to meet a human being as gracious and humble as that, it was quite an honor, especially at his home.’

But, according to Dwyre, Tiger was asked once again when news of Mandela’s death spread.

“Woods delivered a gem, an insightful and revealing observation about the man about whom so many, in his passing, thirst for every detail.”

He described he and his father, Earl, being ushered into a room in Mandela’s home and told that the president would be with them shortly. He said he stood with his father for awhile, felt a presence in the room that he couldn’t identify and finally heard the rustling of paper off to the side in the room. It was Mandela, who had been there all along.

‘He said, ‘When you are incarcerated for 27 years, you have to slow down time.’

There it was, a life lesson at a golf tournament, a worldly observation from the heart and soul of an international icon. It was one, perhaps, that the hurry-up world badly needs.

For this, we thank the delivery man, one Tiger Woods…”

This entry was posted in jude's blog and tagged life advice, Nelson Mandela, Tiger Woods. Bookmark the permalink.
Popups Powered By : XYZScripts.com
We invite you to take our short survey.