Living Alone Has A Big Upside 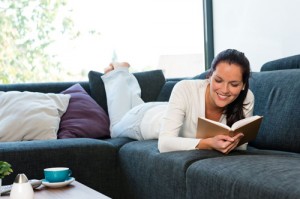 You know the adage “times are changing.” Well that couldn’t be truer when it comes to our living habits. According to a recent report from the U.S. Census Bureau, 27% of adults are single person households in 2012. In 1970 – like 40 years ago — only 17 percent were.

It’s because more people are waiting until they are older to get married and there are more elderly people, who are healthy enough to stay in their own homes. There are also more middle-aged folks making the choice to go solo. Research has found married couples now only make up 49% of households, down from 71% in 1970. That’s a 22% decrease. That alone is staggering.

The downside to living alone is that it’s more expensive. However, people report preferring the freedom that living solo brings, especially when it comes to the level of cleanliness in common areas, the noise factor, privacy.

“The rise of living alone is the greatest social change of the last 50 years,” said Eric Klinenberg, author of Going Solo: The Extraordinary Rise and Surprising Appeal of Living Alone. He speculates that as well as the freedom and flexibility living alone brings, connecting online helps people not feel as lonely. They also seem to have more time to do enjoyable activities, such as visit with friends, volunteer, or pursue outside hobbies.

Of course it can be a bummer not having someone to share events with both during and afterwards. And in terms of perceptions and convention, things haven’t changed so radically about being solo vs being coupled. Table for one brings with it a label of “He or she must be lonely.” And “I feel like a fish out of water going to a restaurant by myself.”

It will take a while for society’s mentality to shift, but as we look at those couples with their pregnant pauses and no eye contact or both people engrossed in their phones and other electronic devices over dinner, it’s best to relish and celebrate the many benefits of independence.

This entry was posted in jude's blog and tagged being single, Eric Klinenberg, living alone, miscellaneous. Bookmark the permalink.
Popups Powered By : XYZScripts.com
We invite you to take our short survey.