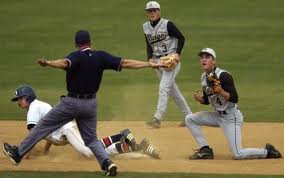 I like most sports and I especially enjoy sports stories that are feel-good tales. So I was delighted to find an article in the LA Times recently about Ryan Powers, a 19-year-old who has become the second-youngest umpire in professional baseball. (I don’t know anything about the youngest but Ryan is a Southern California boy so that’s why he was featured locally.)

Ryan had a rude awakening. During high school he learned he wouldn’t be able to become a professional ball player because he wasn’t that outstanding. But he knew he wanted to be on TV either playing football or baseball. Luckily in high school he was already umping for junior college games in Riverside, California.

So Ryan went to a grueling 5-week umpire training boot camp and after almost melting down and dropping out, turned the corner and was one of 27 of 180 students labeled “honor student.” This means he qualified for a 12-day evaluation by the Professional Baseball Umpire Corporation, the organization that determines who will work with the pros and who packs in it.

According to Kevin Baxter, the article’s author, “Each year, there are 1,200 players and about 300 managers and coaches on major league rosters. There are fewer than 100 major league umpires. Turnover is so rare that during the first seven years of George W. Bush’s presidency, there were as many openings for Supreme Court justices — two — as there were for big-league umpires… More than half the 94 umpires who worked in the major leagues this season have been there at least 14 years — 21 of them at least two decades.”

Ryan passed the evaluation and was sent to work summer league for college players, which is where umpires go before they are assigned to the minor leagues. From there, he was assigned to the Coastal Plains League (Carolinas and Virginia) and then to the rookie-level Gulf Coast League, the bottom of the ladder but affiliated with Major League Baseball.

And that is where he is today. Happy to be on his journey, paying his dues, doing his own laundry, sharing a hotel room with the other umpires for a six day stretch and then on the seventh day, driving to the next assignment.

Ryan Powers says patience is a job requirement. And though the road ahead is long, he sees it as fun because he really loves the game.

When I read how much discipline and training it takes to be an umpire, it definitely gave me a new respect for the officiating professionals. But mostly I really loved reading about someone who got clear about his goal and stayed on a steady path to that end with a great attitude. We all could use a dose of clarifying our goals and then aligning what we know we want with our actions.

This entry was posted in jude's blog and tagged actualizing goals, Attitude Reconstruction, following your dreams, goals, teenagers, umpiers. Bookmark the permalink.
Popups Powered By : XYZScripts.com
We invite you to take our short survey.