I must admit I really enjoy “Car Talk” on NPR. I am aware that Click and Clack, aka Tom and Ray, have retired but really like the fact that they have cobbled 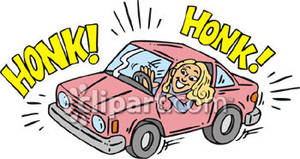 together all the best segments from all the 25 years of broadcasting.

In an episode I heard recently, they read a letter from a listener who was struck by how the brothers could identify a car problem merely by somebody describing the symptoms on the phone. But I was even more amazed by the letter they read about a fellow who frequently drives to Albany, New York. One time he was tuned into a local radio station and heard the show host introduce a guy that had the ability to identify the make, model, year, and sometimes the color – okay the latter is stretching it a bit — just by listening to the sound of a car horn. On the air, they invited listeners to call in to the radio station and honk their car horn. Of 12 people who called, the ‘auto whisperer’ got every make and model correct and only missed the exact year in two cases. And in those, he was only a year or so off.

We all have unique talents, that’s for sure. But it reminded me that we can all get better at listening well so that we can really hear what’s going on and respond from a stance of understanding.

According to Attitude Reconstruction there are only four rules of communication, and if we abide by them our verbal interactions will bring love and connection rather than distance and destruction.

The four communication rules are:

1. Speak about yourself and what’s true for you, about you, instead of telling other people about themselves. No unsolicited advice or observations.

2. Stay specific and address one topic at a time rather than resorting to global generalities, such as “always” and “never.”

3. Be kind and focus on what will move the exchange forward, such as being positive and looking for workable solutions, as opposed to accentuating what’s negative.

4. Listen to understand rather than tuning out or formulating your rebuttal.

So next time you hear a horn honk, use it as a reminder to redouble your efforts to follow the four rules of communication, and you will be able to navigate any interaction with your partner, neighbor, or a stranger with grace and ease.