From China with Love

Ten years ago I met a really fine guy relatively fresh from China. His English was hard to understand but his amazing skills as a doctor and genuine love of 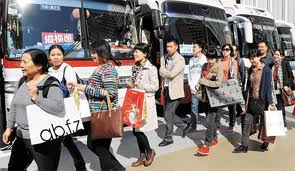 helping people shone brightly. During our years of knowing one another, I have gained a unique perspective about his country, his way of thinking, and his lifestyle. I’ve learned about playing cards and gambling, his desire to please (especially women), and his spending habits. And I’ve witnessed his love of America, value of friends, holiday traditions, and appreciation of Santa Barbara. And today I’m glad to report, his English is vastly improved. However, his taste for most of our food remains unchanged.

Recently I’ve read a couple of articles about China that resonate with what I have observed.

First, Chinese visitors to California as well as the entire US spend more money on retail goods than people from any other country. For your information, Chinese tourists (mostly professionals, executives or managers) spend $2932 in California, followed by folks from Brazil ($2404), then South Korea ($2173), India ($1983), Japan ($1969), and then Australia ($1758).

One third of their spending goes to gifts and souvenirs for friends and family. When you go to any outlet mall, such as the one outside Palm Springs in Cabazon, buses by the dozen are dropping off foreigners. They like to go shopping and choose to spend their money on high-end goods that are more expensive in China (and status symbols for sure), heading to stores like Coach, Polo, Nike, Neiman Marcus, and Tommy Hilfiger. They often buy suitcases to take their valuable loot home. And while they spend money on tangible goods, they tend to go the economical route with food and lodging.

The second article articulated China’s concern over the bad impression the Chinese are giving the world when they’re traveling abroad. This concern was highlighted by a young boy who was visiting Egypt with his parents. He scratched his name into an artifact at a 3500 year old Egyptian temple, and this was brought to China’s attention by a countryman who blogged about his own embarrassment in seeing the graffiti so far from home.

This event has led to the teen being hounded mercilessly and to the Chinese National Tourism Administration issuing etiquette guidelines to citizens going abroad. These rules include how to wait in line and speak softly, refrain from spitting, flush toilets, and obey red traffic lights. Editorials in news media picked up the baton, and said that “this instance shows our families and schools have failed to deliver to the children something that should be expected first and foremost of any education: moral principles and civic virtue.”

I find the contrast stark. Unlike the USA, China is able to impose sweeping reform very quickly. Of course, we have to hope that new guidelines are good for the people, the planet, and world peace. It would be great if we could do this here.

I’d love sweeping reforms so that there would be safe places for all citizens of any age or nationality to express their emotions physically, constructively, and naturally. I call these areas “OK rooms.” They belong in every office, school, hospital, prison, park, mall, and home. If we could understand and appreciate the value of emoting in this way, and it was seen as normal, we would find our sadness, anger, and fear (and all the fallout they bring in terms of hurtful communication and destructive behavior) decreasing, and the amount of joy, love, and peace on the rise.