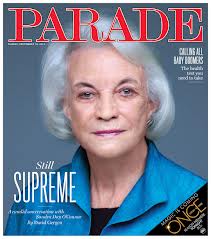 About a year ago I read an article in Parade, the Sunday LA Times supplement. It was about Sandra Day O’Connor’s latest initiatives. (She was a Supreme Court justice before retiring a few years ago.) Almost defying the impossible, that newspaper clipping made its way to its proper folder and file. Then a few days ago, there she was in the Times, once again sounding the drum about her mission to boost our country’s lack of knowledge about American civics.

And you know what? I think it’s a fabulous idea. Recently I talked with my friend who is waiting for a letter instructing when to report to take the pledge of allegiance to the USA. She was studying to take the citizenship test, and getting a thorough grasp of the foundations on which our great nation is based. I quickly learned that there was no way I could pass the test without a major refresher course.  Oops!

So back to 83-year-old Sandra Day O’Connor:  In 2010 when she came across a poll proving fewer than a third of us could name the chief justice of the Supreme Court, she (and I’m sure a few of her pals) came up with an online program made up of online games to educate students. It includes all kinds of civics topics such as checks and balances, amendment rights, houses of government, courts, elections, etc.

What a simple, clever, and effective idea — iCivics. I’m guessing she has the connections to gather people to help her create the curriculum and learning games and to make them fun and available. No doubt there will be an ability to get some good testimonials as well as celebrity endorsements to make civics cool to do. Some marketing firm should be able to help spread the word!

From a stronger knowledge of how the government operates, we will start to have a bit more gratitude for the rights we have, and this can’t help but spill over to other areas of our lives. Every little bit helps! Hooray for Sandra Day O’Connor.

How good is your knowledge of civics?