Politicians — Is Anyone Really Out There? 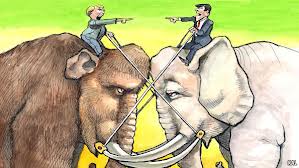 In the wake of all the gun violence we’ve had recently, I went on a campaign to advocate for OK Rooms, places where people can go and safely move out their anger energy in a physical and constructive way. They’re effective. They reduce violence on a personal, national, and global level. And I see them as a low cost solution: release anger from the body by pounding old phone books with a flexible plastic hose, pushing against a wall or door-jamb with all your might, yelling loud noises into a pillow, or lying on your bed to kick and scream.

Emotions are just that: E (energy) in motion. If we get rid of that energy in a safe place, we won’t be taking our frustrations and peeves out on people and things of value.

I thought I’d share my observations, based on my experiences as a psychotherapist for over 30 years, with some of our politicians who request input from their citizens. Most politicians seemed focused on gun legislation at the expense of getting to the real root of the problem –underlying anger. However, if we express our emotions, like a young child melting down with a temper-tantrum, we drain the anger energy and transform ourselves back to our present and loving selves.

So I wrote emails to President Obama, Vice President Biden,  the Office of Public Engagement …. Michelle Obama, Senators Boxer and Feinstein, my Congresswoman, and Illinois politicians such as Rahm Emanuel and Senators Kirk and Durbin of Illinois. And though our government says, ‘we’re listening, please let us know your views,’ the reality is that I received only two meaningful responses! (Well actually I received three, but the one from Senator Boxer was a form letter that wasn’t relevant to my email.)

So kudos to Senator Richard Durbin. He responded in one week. And kudos to Lois Capps’ office. I just received an email yesterday – 5 weeks later, but the first paragraph at least made me think that someone did read what I had written. The rest of the letter was generic about how much needs to be done and what she is doing.

So to the rest, I say, “Come on folks. If you ask for input, let us know you’re listening. Don’t you have a ton of interns that would willingly help to keep you in touch with your constituents?” There are millions of people with good ideas to help our country reverse some troubling trends.

And I say to people like me who made the effort, “keep at it!” Sometimes it takes a plane circling several times before it can make a safe landing.

What about you? Have you gotten any action as the result of contacting your local elected officials? Please let me know of your success stories!