I’ll Pass on the Fast Foods. Give me Alice instead.

Two things caught my attention in the last few days. First there was an article in the 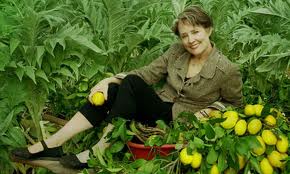 LA Times and other publications, that reported that in July 1999, David Whipple of Utah stashed a McDonald’s burger in his coat pocket and forgot about it. When his wife discovered it a year later, it looked like he’d just purchased it. (He has the receipt.) So they did a little experiment, and kept it to see what would happen. Now 14 years later it still looks the same, except that the pickle has deteriorated.

McDonald’s issued an explanation as to why that might not be so unusual, but I think the message is clear. If mold and fungus won’t eat it, then we probably should steer clear too.

In contrast, I then had the pleasure of attending a lecture by Alice Waters of Chez Panisse fame. Here’s a gal who has had a restaurant in Berkeley, California for 40 years and it’s going stronger than ever.

What has she learned? Alice believes the root cause of our country’s negative slide, (with the rest of the world unfortunately following) is fast food. She spoke of fast food values, such as uniformity, efficiency, availability, cheapness, drudgery, more is better, and dishonest labeling. Alice pinpointed the beginning of our downward spiral began in the 50s with TV dinners and has now completely taken over.

Where is the light in the darkness? What’s the opposite? Alice believes it’s a “slow food culture” such as she learned while studying in Europe many a year ago. That doesn’t just mean eating slow, but having more connection with the growing and preparing aspects of food. And I was delighted to hear the best way to engrain a slow food culture was to start in the schools, as 20% of people are in school at any one time. This is where true education and influence occur.

For the last few years she’s been consulting with Yale University because they’re interested in transforming their food offerings. And locally, Alice has been involved in the Martin Luther King School in Berkeley, with planting veggie gardens, new menus, and free lunches so that children learn food skills at an early age, eat nutritious food, and cultivate an appreciation of this other way of operation.

Her belief is food can transform culture! I love that. And I would add, we can transform our culture if hand in hand, schools start to teach children about emotions and how to express their sadness, anger, and fear physically, naturally, and constructively. By doing so, they’re offered solutions instead of reverting to the destructive attitudes and behaviors that we’re witnessing in society today.

So what about it? Slow Food and Attitude Reconstruction can change the world!