Angry Little Girls Are Way Ahead of the Curve

You might not have heard of Lela Lee yet but you will. She’s the equivalent to the South Park guys, Trey Parker and Matt Stone. 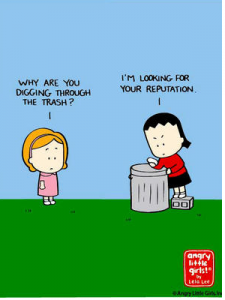 Her perspective is that of a young Korean woman. Lee says that Kim is who she wished she could have been growing up. Rather than being the stereotyped quiet Asian girl, the main character, Kim, is the opposite: she tells you exactly who she is and what she’s thinking. “It’s not easy being a girl, stuck with mean parents, a dumb boyfriend and annoying friends,” Kim declares.

Up to now, Lee has produced a series of seven comic books and a line of products such as T-shirts, dolls, aprons, tote bags, iPhone cases, and mugs. But now she’s coming to television this summer on Mnet, an Asian American channel with her new cartoon show called “Angry Little Asian Girl.” I for one am going to check it out.

Kim has a group of gal pals and a “Korean” mom, Mrs. Lee, who like Lela’s mom instilled the message of “work harder” “try harder” “achieve something and be somebody,” and “make money.” Kim tells it like it is, contrary to what Lela, like most girls, were taught — stuff what she was thinking and feel humiliated instead.

Lela Lee has paid her dues. She started cartooning while she was at Berkeley almost 20 years ago. However, Lee doesn’t just give voice to the Asian girl. The things she says and issues she addresses ring very clear for me, a middle class, Caucasian woman. I too, rarely spoke up for myself and I know that I was not alone. Lee speaks about universal issues, such as family, frustrations, food, and society in general from the perspective of many a silent female.

I believe Lela’s cartoons will be a refreshing alternative to all the medical murder and reality shows. I’m here with applause. Fabulous. A needed voice. Hopefully it will be fresh, fun, right on the money, and for her mother’s sake, make her a lot of cash.