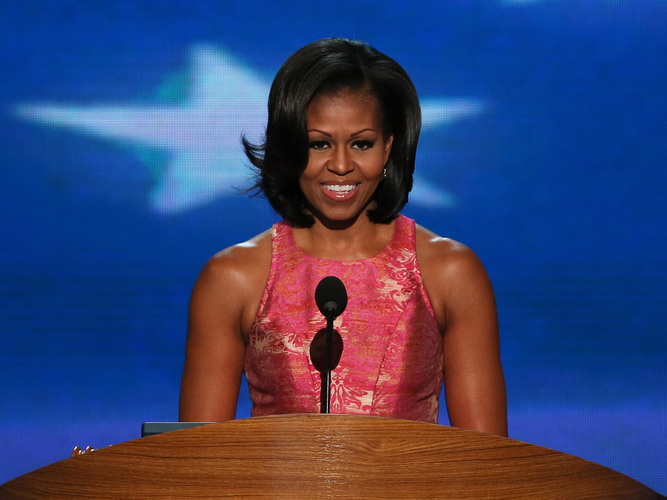 Politics just aren’t my thing.  I knew this to be true as I watched Nixon getting elected many moons ago.

I follow politics at a distance and avoid political discussions at almost any cost. But I have to admit being taken by Michelle Obama’s recent speech at the Democratic Convention in Charlotte, Virginia.

Something about the way she spoke stirred a distant memory: while living in Ottawa Ontario Canada, I was repeatedly blown away listening to Pierre Trudeau, the Prime Minister at the time. A rare politician, it felt as though he was actually talking to me (and everyone else). He didn’t speak in glossy, meaningless terms. He was a straight shooter, and it renewed my faith that there was an option for how politicians could be.

I happened to catch “Michelle” in the car as she addressed the Democratic Convention. I know she must have tons of speechwriters helping her craft her talk, but I admired/liked/enjoyed/was inspired by her ‘no BS’ delivery.

Columnist Adam Hanft wrote that she drew on both Eleanor Roosevelt and Oprah Winfrey as the wind behind her sails. I loved hearing that her talk was so compelling that even Fox News could find nothing to criticize.

So rather than summarize her masterful talk, I’m reprinting Adam’s article. I believe he really nailed what Michelle has done.

Hope springs eternal. Let me know what you think at facebook

There were two figures who stood, invisibly but powerfully, behind Michelle Obama as she gave her speech last night. Two women, generations apart, speaking through a third.

The first was Eleanor Roosevelt, who invented the concept of the modern first lady, and who in fact operated at a level of personal involvement and passion that has still been unequalled. (Mrs. Roosevelt gave 348 press conferences of her own, at which no male reporters were allowed.)

The second was Oprah Winfrey, who became the first African-American celebrity to command vast cultural attention — and achieve enormous influence — by using her personal story as an inspirational vehicle that encouraged others to accept and overcome their own struggles.

Mrs. Obama’s speech deftly wove together the leadership role of the first lady as created by Mrs. Roosevelt, and the culture of introspection, emotion, and confessional drama that was the daily conversation on Oprah’s couch. Of course, the role of race can’t be ignored in this confluence of influence; Eleanor Roosevelt was a famous fighter for the rights of African-Americans. Oprah, of course, used to be the most famous black woman in the world.

The combination of these two strands — and the emotional self-confidence of the second would not have not possible without the pathfinding courage of the first — is the reason the speech was rapturously received by some, and well-accepted by others. As E. J. Dionne Jr. noted in the Washington Post: “As a general matter, her speech was a big hit: good enough that even Fox News was kind to her.”

Mrs. Obama began by recounting her travels across America. Eleanor Roosevelt was the first wife of a president to travel and make speeches on her own. The first lady spoke of “teachers in a near-bankrupt school district who vowed to keep teaching without pay” and “people who become heroes at a moment’s notice… flying across the country to put out a fire.”

That was her Rooseveltian syntax. Then she pivoted directly to the Winfreyian; she spoke, from a mother’s point-of-view, about bringing up her daughters in the White House.

“While I believed deeply in my husband’s vision for this country… and I was certain he would make an extraordinary president… like any mother, I was worried about what it would mean for our girls if he got that chance.”

Then she goes full-on Oprah schmaltz:

“So when people ask me whether being in the White House has changed my husband, I can honestly say that when it comes to his character, and his convictions, and his heart, Barack Obama is still the same man I fell in love with all those years ago…

Woven into this were moving vignettes of her father’s physical struggles with MS, and his extraordinary work ethic. This was both a spoken and unspoken rejoinder to the Republican attack on her husband for “gutting” the work requirement for welfare recipients. How could anyone whose father valued work so much, be married to someone who values work so little, she implicitly declared.

“…every morning, I watched my father wake up with a smile, grab his walker, prop himself up against the bathroom sink, and slowly shave and button his uniform.

And when he returned home after a long day’s work, my brother and I would stand at the top of the stairs to our little apartment, patiently waiting to greet him… watching as he reached down to lift one leg, and then the other, to slowly climb his way into our arms.”

This is a very modern kind of sharing, though it clearly be scripted and politically-motivated sharing theater. Mrs. Roosevelt never spoke about her marriage or really all that much about Franklin (for reasons which are now obvious.) She lived in an era that was free of public introspection; it was rare for her to speak as personally as she did in her radio broadcast on the day after Pearl Harbor, which actually came before her husband’s famous “Day of Infamy” speech:

“I should like to say just a word to the women in the country tonight. I have a boy at sea on a destroyer, for all I know he may be on his way to the Pacific. Two of my children are in coast cities on the Pacific. Many of you all over the country have boys in the services who will now be called upon to go into action.”

Mrs. Roosevelt took on major issues, many of them controversial, the most scalding of the hot-buttons, and spoke ringingly in her voice. In that way she was even more modern than Michelle Obama, whose causes are largely domestic and non-controversial, like childhood obesity and the inarguable goodness of growing your own zucchini.

So as we expected, there wasn’t much political red meat in this speech — other than a few not-so-veiled references to “playing by your own set of rules” which invoked the luxe, influence-rich world of Mitt Romney and Bain Capital.

And there certainly was no policy in this speech. There was no talk of “how.” That will be left to those later in the week, including her husband, who will lay out the policy prescriptions for job creation and deficit reduction and the roadmap to a vibrant economic future.

This was a speech about “why.” Why Barack was the right choice then (the ancient year of 2008), and why he is the right choice now. Michelle Obama — a historical figure in her own right — compellingly supplied her personal, emotional justification for the “why.” She did that by putting her story, and the president’s, in the ultimately American context of personal, odds-defying achievement. She argued that understanding leads to action.

“Barack knows the American Dream because he’s lived it… and he wants everyone in this country to have that same opportunity, no matter who we are, or where we’re from, or what we look like, or who we love.”

While the subtle gay marriage reference was pitched to the base — those who were in the hall, and those beyond the balloons — it was also perfectly tuned to the frequency of independents and undecideds.

The speech called back all the reasons that America voted to let her husband start the job. That moment and that national choice, those emotionally plangent chords — far more than arguments about Medicare or “who built that” — will determine whether he gets to finish the job. It was the right pitch to make.

If President Obama is given his chance, it will be fascinating to watch whether a second term liberates the first lady from the controversy-free confines of the vegetable patch. (Which, by the way, was Eleanor Roosevelt’s victory garden.)

It’s doubtful. While we can expect to see Michelle Obama on the campaign, defending her husband and going after the Republicans, her advisers will be cautious about squandering her popularity with vitriol.

If the Obamas are returned, White House advisers will seek to maintain her popularity, and use it strategically. Which means we’ll see less Eleanor and more Oprah. So we’ll have to wait for the Obamas to leave the White House whether Mrs. Obama wants to assume a broader and more vigorous role in the national dialogue. That’s something we’ve always known she was capable of, and which was affirmed last night.